You are here: Home / Contributing Writers / Do You Write for Young Adults or Millenials? Then Try Snapchat

“Life’s more fun when you live in the moment.” — Snapchat slogan

Social media aficionados like to jump on the newest, shiniest objects on the internet and today there are few sites attracting more buzz than Snapchat.

The Verge reported in April 2016 that Snapchat has 100 million daily users who spend on average 25 to 30 minutes using the app. An estimated 60% of them use the app to create images and videos. Major brands that market to young adults and millennials are using this app to promote their wares. Buzzfeed, MTV, and Tastemade offer stories on Snapchat—and so do CNN and The Wall Street Journal.

To learn more about the history of Snapchat and how to use it, there’s another good post and it’s by Gary Vaynerchuk on Medium.

Snapchat is not for every writer, but if you’re an author of teen, young adult, or new adult fiction, then you’ll want to consider it. There also seem to be a lot of romance writers on Snapchat.

Consider these statistics from the Business Insider:

In 2015, Business Insider reported that according to a Comscore analysis, there are more millennials on Snapchat than any other social media platform. The vast majority of the millennial users are between 18 and 25 years of age.

Signing Up for Snapchat

If Snapchat intrigues you, go to your mobile phone and download the app to get started. You’ll need a username and password. Some bloggers recommend using a fun name. If you’re a teen, sure, pick a hilarious name your friends will like. But if you’re an author, use the name that appears on your book covers.

Once you sign up, you’ll need to confirm your email. Soon you’ll receive a series of fun, informative images and Team Snapchat will send you a video of instructions on how to use the app. 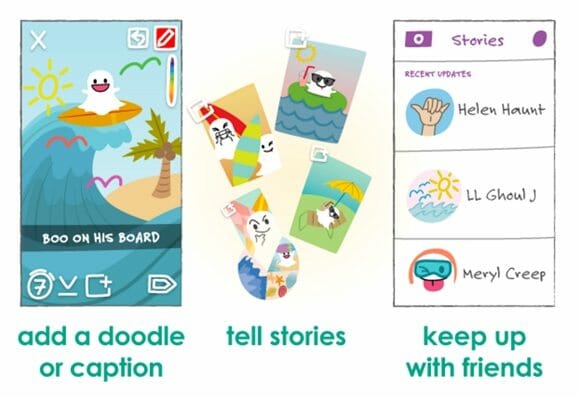 To add your profile image, tap on the ghost. You can stay in one position or move your head around to create a GIF avatar.

To revise your settings, click on the gearshift. Here you can:

As with most social media sites, each time you visit the app, there’s a newsfeed of updates and stories from the people or brands you follow.

When you’re in messaging mode (which is similar to using an instant messaging app), you can:

As a test, I contacted Mark Coker. I’m sure he has better things to do than reply to a Snapchat test message from someone he doesn’t know but hey, it’s all in good fun, right? He responded right away with, “Hey.” A week later he sent me another message. By the way, his Snap Score is 3,202.

Here are some general tips to get you started.

What are people doing on Snapchat? Here are a few examples:

Angeline M. Bishop sent me the longest response to my query. She writes New Adult novels and is an active Snapchat user. She said this during a chat:

“Snapchat is a great way for readers to see behind the velvet rope. Authors have a mystique about themselves and we are generally very private people. Snapchat helps readers see who their favorite authors are and helps them discover writers.

“I like to engage my readership and take part in things they are doing. The New Adult genre is exactly what the average Snap likes too read to college campus life is big on Snapchat.

“There’s also a network of wonderful marketers here. They help you connect with your readership and encourage you to get to know the other Snapchat personalities. My advice to other authors would be … to think of Snapchat as a fun pool party. You get a chance to peek into someone’s life and socialize for a moment. Don’t take yourself too seriously, have fun, and comment on the things you find interesting.”

Riverhead Books promoted books by its writers by creating a series of images and publishing them as a story. Here’s one of them. Here’s a picture of a bag of books that the Graduated Bookworm posted. Except for the short videos of authors holding their books that Crown Publishing posted, I didn’t see any overt marketing. What I did find were authors giving their readers an inside view into an author’s life. I found everything from Stephanie Taylor’s son sleeping to other author’s images of Obama. Here’s a glance of the images I found.

Perhaps Stephanie Taylor, with this image, is reaching out to Millenial moms, who are readers of hers. It’s a precious video that reveals the life of the author as a mom. Angeline M. Bishop likes a certain phrase from President Obama’s commence address and shared it with her followers. Stephanie Taylor shares her preference for a cold cup of java with plenty of whipped cream on top. Angeline M. Bishop shares her appreciation for The Game of Thrones while letting readers know that she’s too tired to watch it tonight. Are you on Snapchat? Let us know in the comments if there are other ways that you like to use this social media network with more daily users now than Twitter.