Since then we’ve published literally thousands of covers and critiques, skewered the covers that seemed wanting, and praised the designers who showed real innovation and skill in this new form.

Yet even today the ebook cover has not broken away from the print book tradition, either in the basic strategies designers use to interest and attract readers, or in the way the covers are represented graphically, as clones of their print book cousins.

At least, that’s my hope. These monthly posts provide a great opportunity to see the progress from one year. And they are also a great place to research cover designers for your next project.

Links to all the individual monthly posts, as well as a link to the submission form for future contests are here:

You can view the roundup of winners from previous years here:

Below, you’ll find this years’ winners, month by month (each is linked to its sales page, too). Having just looked over the 2013 winners, I think this years’ covers are even better. Looking at them now still makes me excited about the design skills they show, and the clear, compelling statements they make about the books within. Enjoy.

Drawn from a pool of 1,458 covers submitted (1221 fiction, 237 nonfiction), here are the winners in fiction and nonfiction for the year: Fiction: Michael Berrier, Cargo, Designer: James T. Egan of Bookfly Design
JF: We’re instantly aware of the drama and tension of the story. A very self-assured design that does a superb job of communicating with readers. Nonfiction: Mary Reilly Mathews, The Creativity & Camaraderie Club Handbook: Have More Fun, Live More Wholeheartedly, Encourage Each Other, Designer: Derek Murphy
JF: I think the designer got it just right. The cover has fun, vitality, and action. You want to jump in. Fiction: Shannon Selin, Napoleon in America, Designer: Matt Dawson
JF: What a great concept, and the resurrection of Napoleon’s own handwriting makes it all the more believable. Fiction: Jessica Hagedorn, Dogeaters, Designer: Mauricio Diaz
JF: Fantastic. The novel is set in the Philippines, and this cover is striking and memorable in all the best ways. From the mirror images and their intense eyes, to the roiling background to the typography that’s almost bursting out of the frame, everything comes together to create a vivid ebook cover. Fiction: Arshavir Shiragian, Arshavir Shiragian – The Legacy: Memoirs of an Armenian Patriot, Designer: Damonza
JF: Damon’s great storytelling skill works just as well for nonfiction. Here he gives us a peek at the historical background, an idea of how bloody this story is, and a sympathetic, if nuanced, portrait of the unusual man at the center, bringing history to life. Fiction: Nancy Kimball, Chasing the Lion, Designer: Alexandre Rito
JF: Wow, now that’s a strong, confident ebook cover from a designer in complete control of his ingredients. No need for confusion, glitzy type effects, or anything else that will distract from the impact this cover makes. Nonfiction: Belinda Darcey, The Princess Guide To Rome, Designer: Belinda Darcey
JF: What a great approach for this “cheeky, fun” guide to Rome. I love the simplicity and economy of the illustration style, as well as the tongue-in-cheek series logo. Just great. Nonfiction: Vahe Habeshian, Voices From The Past, Designer: Damonza.com
JF: Beautiful and evocative, perfectly combining content with the graphic representation of that content. 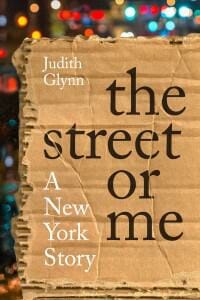 Nonfiction: Judith Glynn, The Street or Me: A New York Story, Designer: Guido Caroti
JF: A brilliant cover that shows how the creative process can offer up the perfect image to encapsulate the main thrust of the underlying story. Note also that no distressed, over processed, or effects-laden type was needed to get the point across. Fiction: Craig Schaefer, The Living End, Designer: James T. Egan of Bookfly Design
JF: Creepy and beautiful at the same time, with deftly treated typography. And the care the designer has taken with every small detail of this cover is impressive. But it all adds up to a real winner. Nonfiction: Sarah J Swofford, From Ouch! To Ahhh…The New Mom’s Guide To Sex After Baby, Designer: Damonza
JF: A great treatment for another sensitive topic. The flower is perfect, and the type treatment helps to amplify the message of the title. Really nice. Fiction: James O. Born, Field of Fire, Designer: Momir from Damonza.com
JF: If possible, even better than the other submission from the same artist. Here, the hot and violent atmosphere is captured perfectly, strongly implying the tension to be found inside. Almost demands to be opened by a fan of thrillers, and in this one a series of bombings play a crucial role. Nonfiction: Steven Liaros, Rethinking the City, Designer: Scarlett Rugers Design
JF: Excellent congruence between the subject matter, the imagery used, and the typographic creativity of the title. A real winner. Fiction: Kim Velk, Up, Back, and Away, Designer: Juan Wijngaard and Scarlett Rugers
JF: Everything you want in a book cover. Fantastic illustration that virtually propels us into the story, and distinctive design and typography that can’t be mistaken for any other book. Lovely. Nonfiction: Doug Lansky, TRAVEL: The Guide, Designer: Doug Lansky (art by Nino Keller)
JF: Humorous, dramatic, and a little frightening all at the same time. A full-on winner with great art and packing a real wallop. Fiction: Erin Satie, The Secret Heart, Designer: James T. Egan of Bookfly Design
JF: An absolutely sumptuous cover in which every element, every level of detail the designer has introduced plays a part. The careful type treatments and appropriate textural elements all help to convey both the languor of the scene and the period look and feel. Nonfiction: Betsy Kruger, Aesop’s Keys to Profitable Marketing, Designer: 1106 Design
JF: This delightful and perfectly targeted cover is so appealing it draws you right in. Who’s the dog and why is he on the cover? When it’s this inviting, who cares? Fiction: Domino Finn, The Blood of Brothers, Designer: James T. Egan of Bookfly Design
JF: Attracts the eye and won’t let go. You can almost physically sense the pent up energy, and the hint of menace only makes it more attractive. Strong impact and a direct message make this a winner. (The “Sycamore Moon” is series branding.) Nonfiction: Charles Alonso, How Schopenhauer Got Me Through My Mid Life Crisis, Designer: Dane & Brittany at EbookLaunch.com
JF: Love the way the designer has brought all the elements on this cover into a vibrant whole including title, art, and background. Combining energy and humor makes this cover magnetic.

So which ones are your favorites? Let me know in the comments.