I have a particular affection for this all-day workshop that’s held every year by the Bay Area Independent Publishers Association (BAIPA). The event draws people at all stages of independent publishing, from those who are “thinking about it” or “gathering information” to people who are experienced authors and self-publishers, and small publishers as well.

It’s an educational event, with breakout sessions on book design, marketing, children’s book publishing, the editing process, getting book reviews and how to turn your book into an iPhone app. Spread throughout the day are presentations by three speakers.

Danny O. Snow on The e-Book Bandwagon: Myths, Realities and News You Can Use First up in the morning was Danny O. Snow, a senior fellow of The Society for New Communications Research (SNCR.org), a Palo Alto based think tank dedicated to the advanced study of new and emerging media.

Snow founded Unlimited Publishing LLC, “The Professional POD Book Publisher™,” in 2000. Snow also works as a consultant to fellow authors and publishers, as a public speaker, and as a journalist. In 2009, he was elected to the board of directors of the Independent Book Publishers Association, serving 3,000+ publishing firms across North America and around the world.

Snow feels that the advent of ebooks will not mean the end of the printed book, but may in fact promote printed books as a parallel product. He pointed to the success of the Christian Science Monitor, which switched to an electronic edition and a once a week print edition, and found that the popularity of the electronic edition actually increased the popularity of the print edition.

Snow, who has researched the transition to digital text and published a paper on the “evolution of content” feels that the future of ebooks does not lie in new hardware like the soon-to-appear Apple iPad, the Amazon Kindle, or any of the myriad of other tablet PCs or dedicated book readers appearing on the market.

He pointed out that only 5 million Kindles have been sold since they’ve been on the market. Perhaps the iPad will sell 5 million within its first year of production. He contrasted this to the size of the smart phone market, where 50 million smart phones that can be used as e book readers are already in use, and the market may quickly grow to over 100 million.

Snow: Smartphones Are the Smart Choice

To address the problem of piracy in electronic editions, Snow suggested that the conversion of books into applications will solve many of the problems of piracy while also making books available through iTunes or the Apple iPhone app store, not in the new iBook store that Apple is developing. The book will become a one-piece software app, and won’t require a dedicated piece of reader software like Stanza.

Snow used the talk to announce a new program by his company Unlimited Publishing. He will make available a conversion program that will convert Word, HTML or PDF files into a stand-alone application for smart phones,

with the ability to search, enlarge type size, insert notes, read at night with backlighting, and many other useful features. . . . About two weeks after approval, the completed e-book will become available to the public from the Apple Apps Store, followed by outlets for other devices like the Blackberry and Droid. You set the price, and may change it at any time. . . . About 60 days after readers start purchasing copies, you are paid via Paypal, less a one-time processing fee of $5.

There seemed to be quite a bit of interest in his new conversion program, and some relief to hear an industry expert predict the survival of printed books. 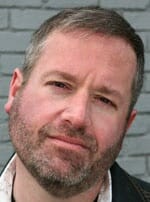 Scott James writes the “Barbary Coast” column for The New York Times, part of the newspaper’s expanded coverage of the Bay Area. He is the recipient of three Emmy Awards for his work in television news. In the world of fiction, he writes under the pen name Kemble Scott. He is the author of two bestselling novels: SoMa was the first novel launched using YouTube, and The Sower was the first novel sold by giant social publisher Scribd.com.

James, having moved to San Francisco from East Coast., began writing stories about the bizarre goings-on in his neighborhood, and eventually started somalit.com, a literary review. He wrote a novel from his stories, and ended up promoting it on Youtube.com with documentary videos about the places that showed up in the novel.

He offered some tips about using videos:

James admitted it helped to be first in a category, because you will naturally attract more attention from media. It was obvious that his background working in the television industry had prepared him well for knowing what would attract media attention.

On his second book, The Sower, James got an education in the way traditional publishers treat authors, and it wasn’t a happy story. He found a small publisher and was contacted by the young entrepreneours running Scribd.com, a document storage website that had grown to over 50 million unique visitors a month.

First for the Second Time

James called Scribd.com the “youtube of documents” because once uploaded, they can be read on any computer anywhere in the world.

James arranged for two other authors to particiapte and the three opened the bookstore on Scribed.com in May, 2009. Once again, being first had its benefits. Within 24 hours, the story was in media all over the world.

James made some interesting points about publishing with Scribd.com:

James now has 34,000 subscribers on Scribd.com, and these readers constitute a good part of his author platform. He’s sold Spanish-language rights to his new book, and his new publisher, Numina Press in San Rafael, went from signing his contract to a published book in 29 days, something virtually impossible for a large publisher to accomplish. By concentrating on independent bookstores in the Bay Area, he was able to make the book a bestseller on the regional bestseller lists.

The job offer from the New York Times also came as a result of his book publishing activities.

James was matter of fact in reminding the audience that the mainstream publishers still have the money, penetration of the retail channel and access to big media to continue to act as gatekeepers. By taking risks with new technology, small publishers can move more quickly, and that’s an advantage.

Well, there was a lot to digest from these two speakers. Both concentrated on new forms for books outside the traditional printed book. Both spoke of holding on to your rights, controlling what happens to the content you create.

The last speaker, David Mathison, came on later in the day. His talk will be the subject of Part 2. Look for it tomorrow, I promise you won’t be disappointed.

Takeaway: Attention in the publishing industry, from large to small publishers, is riveted on the influence of new technologies, what they will mean, and how we can profit from them. Stay tuned.