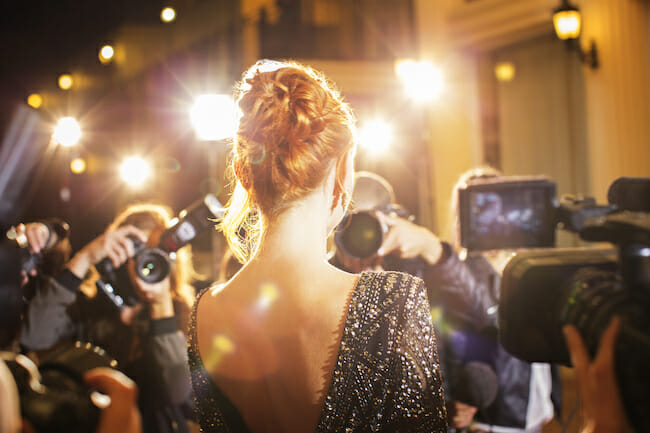 Editor’s Note: This is a guest article from Helen Sedwick.

Writers worry about using real people’s names in fiction. Even memoirists and nonfiction writers identify people by name and worry about the ramifications. Can writers model characters after real people and name names without getting sued?

Yes, they can, with some common sense limitations.

Over the next three posts I will talk about the legal risks of using real people in your writing; namely defamation, invasion of privacy, and misappropriation of the right of publicity. A thorough discussion of these issues would fill a bookcase, so don’t read these posts as the definitive word. My goal is to help you spot issues so you know when your need to learn more or seek expert advice.

Let’s start with the Right of Publicity.

What Is the Right of Publicity?

Suppose you want to use Brad Pitt as a character in your book. (Maybe it’s a juicy romance!) Does it matter if he is a small character or a major one? Can you put an image of him on your cover?

What about Marilyn Monroe? It is safer to use someone who’s dead?

What about your Aunt Ruth who’s not famous but had a compelling life story?

Like many legal questions, the answer is – it depends.

The Right of Publicity means a person’s right to control the commercial use of his or her name, image, voice, and life story. It is derived from the right of privacy, and not copyright. It borrows some concepts from trademark law especially now that a person’s public persona is called a ‘brand.’

You do not have to be a celebrity to have a Right of Publicity. Everyone owns this right. If someone were to use your image for commercial purposes, you would have a right to stop them and collect monetary damages.

The Right of Publicity is separate from copyright. Suppose you paid a photographer $1,000 for permission to use an image of Bradley Cooper on the cover of your romance novel. You would not have a copyright problem since you obtained permission from the copyright owner, but you might have a Right of Publicity problem if neither you nor the photographer has a release from the actor. Different rights, different owners.

Finally, the Right of Publicity is a claim under state law, not federal law. The laws vary state by state. In some states, the Right of Publicity dies with the person; in others it survives for up to 100 years! Since writers intend to sell their books everywhere, then someone making a claim could bring a lawsuit anywhere. So assume the most expansive law will be applied. No commercial use for 100 years after death.

What is Commercial use?

The good news is commercial use is narrowly defined when it comes to the Right of Publicity. It’s limited to:

Using a person’s image in an advertisement violates the Right of Publicity. Same applies for using look-alikes or sound-alikes. Bette Midler won $400,000 from Ford Motors after they used a singer to mimic Midler’s voice in an automobile commercial.

Selling t-shirts, mugs, greeting cards, and other products with unauthorized images, also a no-no. (I’ll talk about book covers below.)

Impersonating a celebrity for commercial purposes can also get you in trouble. Yes, all those Elvis impersonators either have permission from Elvis’s estate or are taking legal risks.

Wrongfully implying that someone has endorsed your work or was involved in its production violates a number of laws. This applies even to expressive and editorial work.

For instance, the family of Billy Tyne, the ill-fated skipper played by George Clooney in The Perfect Storm, sued Time Warner Entertainment for using their names for commercial gain without consent or compensation. They also complained that the actual events had been so fictionalized as to portray Tyne as inept. After a protracted legal battle, Tyne’s family lost. The Florida Supreme Court determined that the film was expressive speech and not “commercial.” The fact that the movie grossed more than $150 Million did not change its protected status.

Courts consider the following: Is the use of someone’s name, image, or life story reasonably related to the subject matter, and has the user added new, transformative elements to the work? In non-fiction, the courts also consider whether the subject matter is of public interest. Public interest is so broadly defined it covers hard news as well as celebrity gossip.

Suppose you write about a fictional character who has a crush on Jennifer Lawrence. He bumps into her at a restaurant and accidently drops a plate full of food in her lap. The rest of the book follows his tale of overcoming humiliation and getting up the nerve to apologize. The book is unlikely to violate the star’s Right of Publicity. The use of her name is a small piece of a larger expressive work and is related to the story because it reveals character and triggers action.

The same rules apply to non-fiction and shorter editorial works such a news and magazine articles. Suppose you write about Meryl Streep’s career in a discussion about the evolving role of leading women. That work would be protected speech because her story is reasonably related to the topic and of public interest.

I am assuming you are being truthful. If you are stretching or departing from the truth, then you must consider defamation risks as well. The Perfect Storm case, courts are quite tolerant of fictionalizing a true story. They presume audiences understand that a retelling includes made-up elements and are not statements of fact. You should, however, include a disclaimer such as “This work is based upon real events. Certain events, dialogue and characters were created for the purposes of fictionalization.” I’ll talk about defamation in a later post.

Parody, particularly when it comments on political, cultural and social issues, is protected speech. As with fiction and non-fiction, your use of someone’s name, image, etc. should be related to your topic and a matter of public interest.

My advice about parody is don’t go half-way. Make sure it’s so clear your work is parody that you can argue no one would reasonably assume it’s true.

Even though parody is protected speech, if you disparage someone that person might come after you. The case may be weak, but you would still have a legal headache.

Of course, the safest route is to get permission and to get it IN WRITING. I have known more than one writer who relied on verbal permission to tell a life story, only to have the subject change her mind late in the process.

A Word About Book Covers

Personally, I get nervous about using anyone’s image, celebrity or not, on a book cover without permission. A book cover is too close to an advertisement or merchandise. However, using a person’s image should be permitted if it is related to the subject of the book and the book is of public interest (assuming you’ve taken care of copyright permissions as well). Consult legal counsel if this applies to you.

Whenever courts are balancing interests, the law is inconsistent. I can’t predict what is 100% safe or 100% unsafe.

In practice, consider how much you are piggybacking on the celebrity’s fame to sell your book. While it’s not a legal rule, the more your work calls attention to itself due to someone else’s fame, the more likely you are going to get a cease-and-desist letter or face a lawsuit. Yes, unauthorized biographies are written all the time, but typically the writers and publishers have to fend off bogus threats if not lawsuits before and after publication. Don’t go down that route alone. Get legal help and insurance.

Litigation is typically a result of deep pockets and high emotions. The deeper the pocket (whether it’s the celebrity’s or the writer/publisher’s) and the more intense the emotional response, the more likely you’ll be hearing from someone’s lawyers.

I don’t want to discourage writers from taking risks. The world is a better place because writers, filmmakers, and other artists take risks. But I hope to help writers get a little smarter about what risks are worth taking because they support the story or message, and what risks are simply not worth it.

Helen Sedwick is a Contributing Writer for The Book Designer. She is also an author and a California attorney who uses her thirty years of legal experience to show writers how to stay out of court and at their desks. ForeWord Review gave her Self-Publisher’s Legal Handbook five stars, calling it “one of the most valuable resources a self-publisher can own…well-written and authoritative yet unhampered by legalese.” Her blog coaches writers on everything from protecting copyrights to hiring freelancers to spotting scams. For more information about Helen and her work, check out her profile page here on The Book Designer or her website at https://helensedwick.com.

Get 20+ Of Our Best Resources – From Outline Templates to Publishing Checklists – Now in One, FREE Bundle…