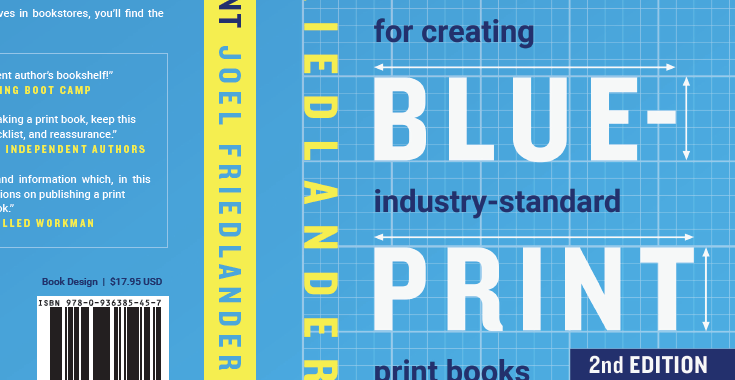 For several years we’ve been giving away The Book Construction Blueprint, an amazingly helpful 37-page PDF with core information about how print books are put together.

It’s a great giveaway, and has been downloaded over 20,000 times.

Here’s the cover, devised by our own Tracy Atkins to match the covers of other guides we offer with various digital book marketing products. This is a clean and clear cover for a PDF. The style is more reminiscent of report covers than book covers, but it’s a style we’ve used for a couple of years to good effect.

Then, last year when I talked to BookBaby president Steven Spatz at the San Francisco Writers Conference, we came up with an idea that would allow me to collaborate with them on a book giveaway.

This gave me the opportunity to transform the free PDF into a real book, one that would be very useful for any indie author who wanted to produce print books.

I went back to my blog archives and gathered all the articles I’ve written over the years about creating print books. These articles included almost 100 illustrations, too.

When we edited the articles and swapped out the low-resolution images for print-resolution ones, we ended up with 224-page, 5-1/2″ x 8-1/2″ paperback.

I retained the title and, since the book was basically created for the giveaway, I decided to publish a print edition at a relatively low price ($9.95) to capture any people who prefer print books from the promotion, which ended up giving away almost 9,000 PDF copies.

Since I knew that BookBaby has an excellent design department, I asked them to contribute a cover design. Here’s the first one they sent me: I couldn’t quite figure out why the book had a ladder on the cover, although I suppose the designer was alluding to the “construction” part of the title. In any event, after talking to my staff, we decided the ladder had to go.

Here’s the final cover we published with: The BookBaby promotion ended at the end of 2017, so it was time to move on.

After publishing the book I identified a number of areas that needed more information, and wrote another six articles to add fill out the content.

I now had a book that runs 252 pages and is even more useful for indie authors.

This time, I reached out to Dane Low and his team at Ebook Launch to tackle the cover design.

Dane has been submitting covers to our Ebook Cover Design Contest for years, and frequently winning awards, so I knew his studio had the range to address this straight nonfiction book.

Dane came back with several possibilities, but he also suggested a change to the title that made a lot of sense. It’s now called The Book Blueprint.

Here’s one of his early designs: 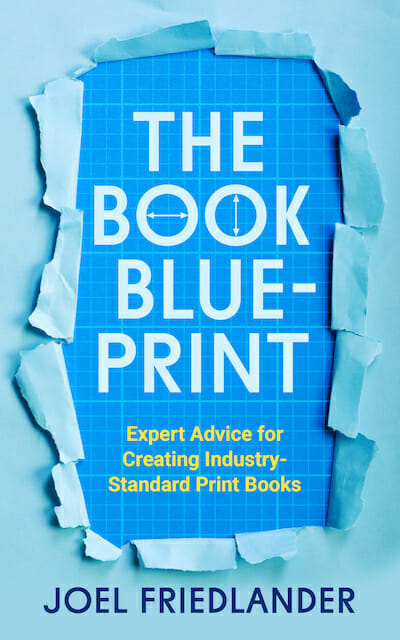 Although this cover is dramatic, I was more intrigued by the “blueprint” look in the background. That’s probably why, in the end, I chose a different concept for the cover: I liked the overall simplicity, the bold title, and the allusion to blueprints (and construction).

However, the cover lacked balance because it was a bit too monochrome, lacking that touch that sets off the other colors. I asked Dane to address this, and to add a banner notifying people it was actually a second edition (since it’s the same book under a different title).

I also asked him to find an accent color to enliven the design, and to remove the period at the end of the subtitle. Titles and subtitles don’t get periods, because they are not sentences, so that’s clearly an error. In the paperback full wrap cover, Dane also used the highlight yellow to produce a colorful spine. Just today I was reading in the New York Times about the paperback editions published by the New York Review of Books in their NYRB Classics imprint.

Katy Homans, designer for the series—all of which have colorful spines—said, “If people are interested because they have a red spine, that’s great.” And I agree. This contrasting color adds some excitement and much-needed contrast to the overall design, which now looks to me like it’s ready for prime time. This cover clearly meets the design standard I hold all self-published books to: that they should be as good or better than books from traditional publishers.

I’ll be taking the Book Baby version down since The Book Blueprint will be out in the next couple of weeks. The cover has evolved along with the content of the book as well as and the changing markets to which it is being offered, as well as the context of its sale.

In the BookBaby promotion, the PDF cover was emailed to their list. For retail, the cover will be seen most often on retailers’ sites. Considering this context can make a big difference, don’t you think?

Do you have a cover that could “evolve” leading to better sales and a wider readership? Or to better align with your publishing goals? Look through your backlist and you may be surprised at what you find.

There are affiliate links in this article.